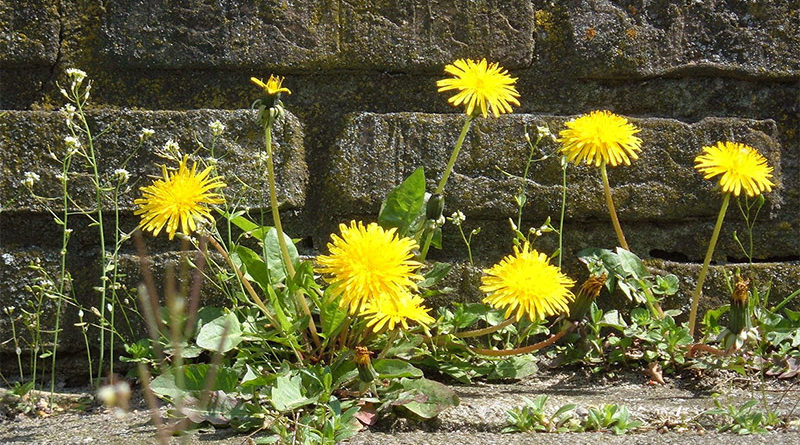 What’s in a Name?

You’d be forgiven for thinking that the name dandelion comes from the flower’s resemblance to a lion’s face surrounded by a golden mane. But, that’s not how the dandelion got its name. It does have something to do with a lion, though. In fact, the name dandelion comes from the old French term “dent de lion”—this translates to “teeth of lion”. The name does not refer to the eye-catching flower though. Instead, the name lion teeth is a reference to the jagged, tooth-like leaves.

So, what metaphysical or spiritual meaning can we take from this? Are there any messages there? Well, not traditionally. However, when we do think of the lion what do we think of? Typically lions are used a symbol of strength. But, not just any old strength. Specifically, lions symbolize a regal, proud sort of power. Also, they are quite often used as emblems for nations and, specifically, a nation’s military.

One of the most widespread beliefs concerning dandelions is that they can grant wishes. In order to make a wish, you have to find a dandelion flower that’s gone to seed. Dandelion flowers that have gone to seed are sometimes called “puff balls”. This is because they are a round feathery ball. To make your wish, first take a deep breath and then blow the seeds up into the air.

Why do we believe that carrying out this little ritual will make our dreams come true? Well, it’s to do with the way dandelion seeds behave. They evolved to be caught on the wind and travel great distances. But, when we take matters into our own hands, and blow the seeds up in the air ourselves, we are actually sending the seeds (i.e. our wishes) up into the sky and towards the heavens. So, we believe that the celestial gods will receive our airborne wishes and grant them.

People also attached meaning to whether or not seeds are left on the stem after you blow it. It’s debated, though, just what having seeds left on the stem actually means. Some people say remaining seeds is a foretelling of good fortune to come. However, others say that unless you clear the whole stem with one puff, then your dreams won’t come true.

Springtime and Rebirth (And a bit of Summer)

All sorts of plants, flowers, bushes, and trees are big symbols of spring. And, of course, the dandelion is no different. When the snow melts and the temperature warms up, then you can expect to see dandelions growing and blooming. So, it goes without saying that we link them to spring and everything that stands for.

Dandelions are symbols of the cycle of birth, death and rebirth. This is especially true of dandelions because of their ability to multiply in such great numbers. When we think of spring, we also think of fertility—what better symbol of fertility than a bright yellow flower that spreads its seeds far and wide, riding carelessly on the breeze?

The color of the flower, yellow, also conjures spring in the mind. In fact, Norse culture equates the dandelion’s flower with the sun itself. And what is spring after all? It is the return of the sun.

The Sun and the Moon

The dandelion is also a very compelling symbol of the sun and moon, and of the endless connection between them. This is because the bright, warm, yellow flower symbolizes the sun. While, the white puff ball of seeds stands for the moon.

Consider this, it is the perfect metaphor for the sun and moon’s relationship: the sun (the flower) shines, fades, and dies, only for the moon (the puff ball) to rise in its place. But, the analogy continues: the seeds from the moon spread and give birth to a new sun. But, that isn’t where the concept ends. In fact, some people extend the metaphysical meaning to include the stars. The individual seeds—when caught on the wind—act as the stars in the sky.

Placing a buttercup under a person’s chin to see if the golden yellow of the flower reflects onto their skin is an old tradition. If the yellow shows on the person’s chin then it supposed to predict a future of wealth (i.e. gold like the flower). While most would link this tradition with buttercups, it can also be done with dandelions. Which of the two flowers is the “correct” one to use is up to you.

If you are a gardener then you will probably already know this. And if you don’t, you might want to chat with a friend who does garden. But anyway, dandelions have incredible roots. In fact, they have a large, thick, and deep tap root.

This deep root is the bane of gardeners who are weeding their flowerbeds; my grandpa would warn me, if you don’t pull out the whole root, the dandelion will grow back! And that fact is a big part of what the dandelion root symbolizes: resilience, the ability to return from apparent death.

But, that isn’t all it symbolizes. The deep stretching tap root allows the dandelion to colonize difficult locations and reach deep for water. So, take the dandelion as a symbol of beauty in difficult situations. Be like the dandelion flourishing in a crack in the city pavement, i.e. no matter how hostile your environment, you are beautiful. It’s this ability to survive in tough situations that also makes dandelions powerful symbols of endurance and, most of all, ultimate victory.

It seems like the Greeks recognized the dandelion’s fighting power thousands of years ago.

After all, according to Greek mythology, Theseus ate dandelions every day for 30 days to prepare for his battle with the infamous Minotaur. He ate dandelions because, he believed, they would increase his power. Lucky for him, it worked and he was able to defeat the terrible Minotaur and save the people of Athens!

So, dandelions symbolize strength, joy, and intelligence. But that isn’t all. They also stand for longevity. This is because the dandelion will start to flower early in the growing season and continue flowering throughout the summer and into the fall. And in some mild climates, dandelions will actually continue to flower throughout the winter. Therefore, if you’re wishing a loved one a long and healthy life, then you could do worse than a dandelion themed gift.

The Irish have a lot of songs about roaming and roving. It sure does seem like theirs is a culture that values wandering and being free. So, naturally, they should appreciate the dandelion. After all, it is the ultimate symbol of freedom and travel. This is because its seeds have little hair-like parachutes on them called pappus. This allows the seeds to fly great distances through the air on nothing but a breeze.

So, the freedom lovers amongst us out there (looking at you Sagittarians), can likely appreciate the dandelion’s ease of travel. After all, what wandering wouldn’t love to catch the wind and go somewhere they’ve never been before? This, of course, is what the dandelion stands for: nature’s freedom.

The Celts, St. Brigid and the Dandelion

On the first of February, the Irish celebrate the feast day of St. Brigid of Kildare. This is relevant because St. Brigid has two symbols. The first is the lamb and the second is, you guessed it, the dandelion. Before Christianity spread throughout Ireland, the day was known as Imbolc. Imbolc marks the beginning of spring. So, you can confidently associate St. Brigid with Spring.

So far we’ve heard about the ancient Greeks and dandelions. We’ve also heard about what the Irish Celts thought of them, too. But, let’s not overlook Norse mythology, because it’s very interesting indeed. Moreover, it includes lots of the broader symbolism associated with dandelions.

You might remember we talked about how the name dandelion refers to the plants jagged teeth-like leaves? Well, if you think it’s odd to name the plant after its leaves than after its flowers then you’ll appreciate the dandelion’s old Norse name: the sunshine of Balder.

Before we go any further, let’s talk about Balder. He was the son of Odin and, importantly, a symbol of light and peace. He was so beloved that when he died, the earth mourned his loss; in fact, the flowers wilted and all things that grew turned brown and died.

It was only the world’s green things that grieved about the loss of Balder. The gnomes also suffered from great melancholy, they missed Balder’s light and warmth. So much so that they decided to visit Odin to lament their sorrow. Odin, full of sympathy, gave the gnomes a gift to ease their pain. Odin gave the gnomes the gift of Balder’s sunshine. And the gnomes shared this sunshine with the world, they shared the dandelions with the world.

Did you know that you can eat dandelions? I wouldn’t necessarily go plucking them from your lawn to eat unless you were certain there were no contaminants. It’s not just a question of whether you have used chemicals in your yard, it could be that neighbors have and rain water could have washed them into your garden.

But anyway, if you can find a safe and clean source of dandelions, then yes, you can eat them. Actually, you could even deliberately grow them on your vegetable patch if you’d like.

There are lots of ways to eat dandelions. But, the simplest way to eat them is to add the leaves to a salad. Be sure to wash them like you would any other green for a salad. Also, be aware that dandelion leaves have quite a bitter taste. The older leaves are much more bitter tasting than the younger ones, so try to pick the baby leaves as they sprout.

Is there a spiritual meaning to the eating of the leaves? Hmm, well—you could say that by consuming the leaves, like Theseus, you could hope to imbue yourself with all of the plant’s powers.

P.S.
If you have pet guinea pigs, give them some dandelions—they’ll love them!

Another belief surrounding the consumption of dandelions pertains to fortunetelling. It is believed that the drinking of dandelion tea enhances one’s ability to predict the future. Dandelion tea is also sometimes known as “dandelion coffee”. Either name is acceptable.

First of all, collect and clean dandelion roots—this is what you will brew the dandelion tea from. Chop the roots into fine pieces before drying them out in a dehydrator. You can also dry dandelion roots in your oven; to do this bake them at a temperature of 250°F (~120°C). Do this until the roots have fully dried out. Be sure not to burn the roots. Next, put the roots in a pan with water and bring to a boil. Do two tablespoons of dried roots to 16 ounces of water (~473 milliliters). After bringing the water to a boil, simmer the mixture before straining the tea and drinking.

What Does it Mean to Dream of a Dandelion?