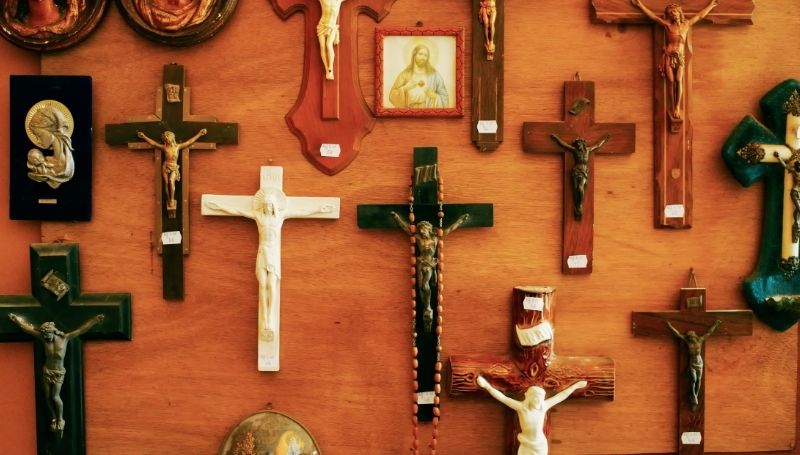 But, don’t get ahead of yourself and start planning funerals or anything. There’s another well known superstition that’s somewhat similar about a picture falling off the wall predicting a death as well. And, it’s certainly possible. Everything is possible! But, in the overwhelming majority of cases no one dies. So, calm down! But, there can definitely be a message behind a crucifix falling off the wall.

Of course, always listen to your intuition before you get too caught up in the symbolism. For instance, if you live near a busy train track, there’s been an earthquake, your cat charges into the wall full speed randomly, or whatever, then it may simply be a one time occurrence and you may not need to worry too much.

However, even if these things do happen and you feel it is spiritually significant then there is possibly a message there for you. After all, there are no true coincidences in life. Or, if it happens rather randomly or it happens more than once, then you definitely need to pay attention! And, as always, only takes what resonates. So, let’s get started!

Spiritual Meaning Of A Crucifix In General

First, let’s make sure we’re all on the same page as to what a crucifix actually is. A cross is a symbol that actually predates Christianity by centuries. We’re talking about deep prehistory and ancient cave drawings. After all, it is a pretty simple design to create. A cross is thought to represent all four elements, then later the cardinal directions. It has been used for centuries to mark gravesites and areas of consecration.

A crucifix is the primary symbol of Christianity, with Jesus Christ hanging from the cross. Over history, the designs of crucifixes have varied. Some crucifixes show Jesus dead, while others show him alive. Most depict his suffering, as a testament to the ultimate sacrifice to forgive mankind for their sins. In some traditions It’s a vitally important emblem to the Roman Catholic Church and the Eastern Orthodox Church as well. Although, some modern protestant faiths prefer to simply have a cross instead of a crucifix. This is because in some traditions it is thought that it is more important to focus on Jesus overcoming both sin and death, rather than on his suffering.

So, if you have a simple cross instead of a crucifix, the message can definitely still apply. You can use the two interchangeably for sure. But, in some cases it may not apply. For instance, when Jesus falls off the crucifix. But generally, a cross symbolizes a general connection with the divine and the afterlife. On the other hand, the crucifix represents a connection with tradition, Christianity, and Jesus Christ’s story specifically. But, both of them have a strong connection with faith. So, make sure to take what resonates and listen to your own intuition first!

Spiritual Meaning Of A Crucifix Falling Off The Wall

So, now that we’re clear on what a crucifix means and represents, what does it mean when a crucifix falls off the wall? Are there demons in your home? Is it true that someone will soon die or meet unfortunate circumstances?! Probably not. Unless you happen to be extremely unlucky. For instance, there was an unfortunate story out of New York in 2012 of a man who was crushed under a large crucifix while he was cleaning it and lost a leg.

Still, in the overwhelming majority of cases, no harm will meet you or your loved ones. Still, if you feel it might be an omen, pay attention to it. For instance, if your grandfather is in the hospital and very ill and a crucifix falls off the wall, you may want to reach out to him sooner than later. But, these circumstances are pretty rare. So, what does a crucifix falling off the wall mean in general?

Simply put, a crucifix falling off the wall is a message to pay attention to your interaction with your religious faith. This could mean that you might want to be more mindful of those in your religious community, family, church, or congregation. Is there possibly some corruption in your congregation? Are your beliefs still truly aligning with those around you? Or, are you just going along with the flow and denying your own personal truth? Are you on the right spiritual path for you?

Ultimately, every situation will be just as unique as we all are. So, it’s impossible to say how it will relate to you directly. But make sure to ask yourself, are you comfortable with the role religion has in your life? Do you feel at peace with where you are currently in your religious faith?

Crucifix Falling Off The Wall And Breaking Meaning

So, if a crucifix falling off the wall means that you should pay more attention to your religious beliefs, what does it mean when a crucifix falls off the wall and breaks? A crucifix often represents faith for most religious people. So, a broken crucifix can symbolize broken hope or loss of faith. But, it’s not quite as bleak as it seems.

It’s important to remember that all of us go through times in life where we question our faith. And, this doesn’t always have to be in a spiritual belief or religious context alone, but in other areas of life as well. We can lose faith in ourselves and our own abilities. We may lose faith in those around us. And, we might even lose faith in the government, in democracy, in our justice system, or our entire society. And, that’s okay sometimes. When things aren’t working out as we like, it’s easy to lose hope. While we all might dream of having unwavering faith, it’s sometimes humanly impossible. Take it easy on yourself.

But remember, the true testament of faith isn’t all the times where you lost it temporarily. But, all the times you kept it alive. Remember, a rough chapter doesn’t mean that the entire book is bad. So, when a crucifix breaks, pay attention to your interaction with faith in life. And, if you want, piece it back together. Our struggles and heartbreaks add to the unique history of our life, they don’t detract from our value. In fact, they add to it. We grow stronger each time we put ourselves back together. Make sure to check out our spiritual meaning of a broken plate article for more insight on this.

What Does It Mean When Jesus Falls Off The Crucifix?

Are you wondering what’s the spiritual meaning of Jesus falling off the crucifix? In this context, we’re talking about when a crucifix falls off the wall and Jesus comes off. However, the meaning can still apply if Jesus falls off a crucifix on a rosary or piece of jewelry as well. So, what does it mean?

From a spiritual perspective, Jesus made the ultimate sacrifice for humanity out of love. He gave his life so that others can be forgiven of their sins, have eternal peace, and happiness. So, when Jesus falls off the crucifix it most likely means one of two things.

The first, is to take a closer look at your own faith. Have you lost faith in your spiritual beliefs? Do you need to spend some time getting back in touch with the spiritual side of life? And, do you truly believe that you are worthy of happiness and eternal peace, not only in the afterlife but in your current earthly life as well? Remember, regardless of your exact spiritual beliefs, we are all children of the divine and the universe. We come from eternal love, and eventually we will return there. Don’t forget, you are worthy of love.

Secondly, are you sacrificing too much of yourself? You may want to look in areas of your own life where you are possibly giving too much to other people. Remember, Jesus was taken down off the cross eventually. When Jesus falls off a crucifix, it may be sign that it’s time to let yourself rest. And, eventually Jesus resurrected into a new form. The same can apply to your life. Let go of things that no longer serve you, so that you might experience a rebirth of your own.

What Does It Mean When A Crucifix Falls Upside Down?

Have you ever had a crucifix fall upside down? Or, alternatively, somehow your crucifix remained on the wall but upside down? It can possibly be a little frightening! It brings up images of scenes from horror movies with terrifying monsters, evil forces, or even demonic possessions. So, is a crucifix being found upside down cause to believe you’re cursed? Or, negative entities or Satanic forces are surely out to get you?

Believe it or not, an upside down crucifix isn’t necessarily a bad omen. According to Catholic beliefs, the upside down crucifix has a connection with Saint Peter who insisted that he be crucified on an upside down cross because he didn’t see himself to be worthy of a death the same as Jesus. For those unfamiliar with Saint Peter, he’s most widely known for being the first Pope and for being the patron saint of fishermen, shipbuilders, and locksmiths because he is said to hold the keys to heaven. Which is probably what he is most famous for, guarding the pearly gates of heaven!

So, what’s the spiritual meaning of an upside down crucifix? Well, may be a message that you might want to pay more attention to Saint Peter and his story if that resonates with you. Do you somehow feel “locked out of heaven” or the good things in your life? You may want to look at your self-worth.

On the other hand, you may want to take a closer look at your own religious beliefs and whether they align with your current lifestyle. Do you believe one thing spiritually, but continuously practice another? After all, an upside crucifix can certainly mean that your religious beliefs may be upside down. Try to take some time to figure out what that means for you personally.

Dream Meanings Of A Crucifix Falling Off The Wall

Have you had a dream about a crucifix falling off the wall? As always, when it comes to any dream interpretation, it’s important to pay attention to how you feel during the dream. If you felt sad or stressed during the dream will have a different interpretation than if you were happy or relieved. So, listen to your own intuition!

Generally, dreaming of a crucifix falling means you feel as if you have lost your faith and lost your way. You may question your traditions, faith, and spiritual belief systems. Or, it could symbolize that you feel you are no longer divinely protected.

Of course, it’s important to pay attention to surrounding events and environments around the crucifix falling off the wall to understand the message deeper. For instance, if you dream of a crucifix falling off the wall that hangs above your bed where you sleep with your spouse, you might feel as if your partner is no longer faithful. Alternatively, it could mean that you feel somehow trapped in your vows for religious factors.

Dreaming of a crucifix falling is usually not a positive omen. But, it doesn’t have to be all bad, it’s simply a warning. Make sure to take some time to examine how you feel about spirituality, religion, and faith in your waking life. Do you feel as if you lost your way? How can you incorporate feelings of peace and security in your life from a broader spiritual perspective? It might be time to work on those important beliefs you’ve been putting off in the day to day hustle.