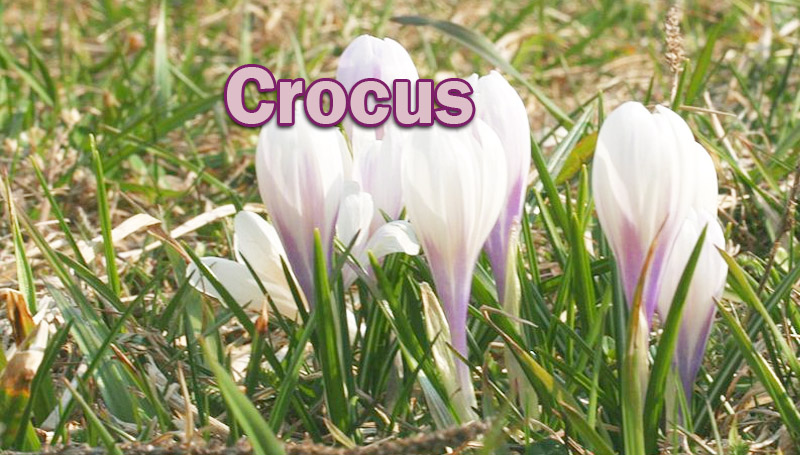 The crocus is a storied plant, and as such, it also rich in symbolism, meaning, and can be a potent omen regarding financial issues. Crocus (acceptable plurals: crocus and croci) are a flowering plant that grows from a corm. They are a part of the iris family.

What makes crocus flowers stand out to us is, quite often, just how soon they sprout in the new year. While other early bloomers like daffodils are lagging behind, the crocus is already offering its showy flowers to the world.

So, it goes without saying that the sighting of a crocus might feel significant to you. And, of course, if that’s what your instincts dictate then do not resist them. By all means, use the feeling of significance to reflect on things and explore the possible meanings, messages, omens and symbolism at play.

Before we go any further, let’s talk about the name “crocus” and what it means. The name we use in English comes from the Greek “krokos”. But, that isn’t the original name for the flower. The Greek got their word for crocus from a Semitic language (Hebrew, Aramaic, Arabic, etc). The word means yellow, but not just any color yellow—saffron yellow. Ultimately, the word goes back to a Sanskrit word, “kunkumam” which also meant saffron.

The reason the flower is named saffron is because, after all, it is the source of the saffron spice.

The symbolism and spiritual meanings behind this name are significant. For example, the robes of Buddhist monks are dyed yellow through the use of saffron. This color and dye was chosen by the Buddhists because it represents renunciation and humility.

So, if a crocus appears in your life—especially a yellow one—it can be taken as a sign to possibly consider renouncing excessive materialism. Additionally, reflect on egotism, arrogance, pretense, self-importance, etc—minimize these elements in your mind, personality and actions. If you are are able to do this, then not only with your life improve, but the lives of those around you will improve.

Lots of spring flowers are associated with rebirth. It’s only natural that when we see daffodils, for example, that we think of new life. However, the crocus is special among all of the early bloomers. This is because it is one of the earliest flowers to bloom. In fact, it blooms as early as January depending where you are in the world.

This early blooming means that, not only is the crocus a powerful omen of rebirth, it is also the herald of winter’s end—it tells us that the dark days are over and, thankfully, the world will begin anew. So, to apply this to your life: no matter how tough the times are, and often in the depth of winter, a flower of hope can bloom. If you’re reading this and are experiencing tough times—hang in there, thing’s are going to get easier.

While crocus do have that well-known association with being the first blooms of the new year, they aren’t necessarily just a spring flower. In fact, some croci (both croci and crocuses are acceptable plurals) bloom late in the autumn. So, while it’s true that the crocus is a symbol of rebirth from the darkest times, it’s also applicable as a symbol and omen of enduring and thriving life. You, like the crocus, can be renewed in spite in the coldness and darkness of the depths of winter.

An End to Financial Hardships