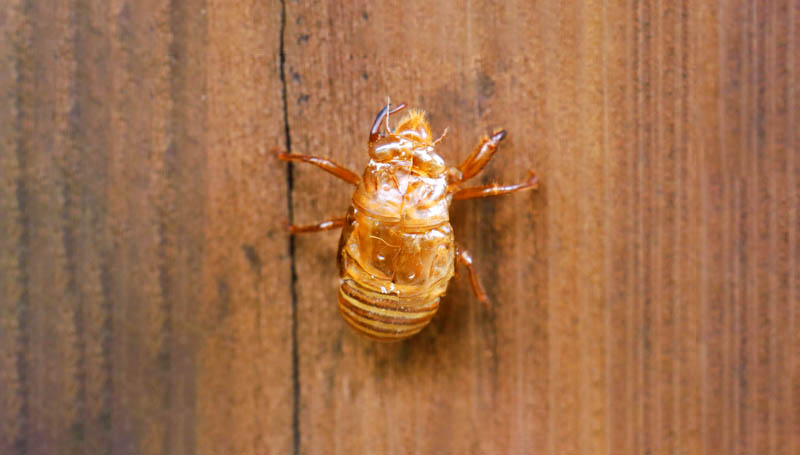 I was watering my petunias the other day when I noticed something stuck to the brickwork of my house. At first, I thought it was a piece of trash, but as I got closer, I realized it was a cicada shell. I had never seen one up close before, and it was quite an interesting sight. The shell was much bigger than I had expected, and the intricate details of its exoskeleton looked almost otherworldly. Up close, the shell was also kind of gross. There were no signs of the actual cicada, just the skin it had shed. Still, it was a fascinating find, and I took a moment to appreciate the strange beauty of nature before reflecting on the spiritual meaning associated with cicadas, and specifically, with finding a cicada shell.

Here’s a neat summary of the spiritual meaning and symbolism associated with cicadas:

There are several spiritual meanings associated with cicadas. In some traditions, they are seen as a symbol of transformation, and therefore also rebirth, as they spend most of their lives underground before emerging in great numbers. Owing to their conspicuous lifecycle, cicadas will always be an emblem for the cycle of life and death—forever representing the cycle of renewal and regeneration that is at the heart of nature.

Cicadas are also often seen as a sign of good fortune for farmers, as their singing is thought to bring forth rain and ensures a good harvest. Combine this with their habit of existing in extreme numbers and it’s easy to see why cicadas are profound omens of complete abundance.

But What Does It Mean To Just Find A Cicada Shell?

In the following sections, we go into detail about the spiritual meaning of finding an empty cicada shell.

The shell is a critical part of the cicada’s transformation—and as such, its spiritual meaning relates to the transformation. Lots of bugs go through larval stages, i.e. they begin life in one form, before dramatically changing into something else. As such, they are all powerful emblems of metamorphosis! They come to us as reminders of the possibility and power of change.

However, finding a cicada shell is a somber aspect of the transformation omen. This is because the shell represents what’s left over after we have changed. The cicada shell can represent the subtle feeling of loss that haunts us throughout our lives—that feeling of loss for the one relationship you really wanted to work out, but never did. And it never could in the future, because both of you have changed so much.

Of course, heartbreak and subsequent growth isn’t the only transformation that leaves detritus in its wake. There are lots of issues we can go through in life that leave a part of us behind, out on the battlefield.

While it might be tempting to wallow in the sadness of this spiritual message, that would be wrong. Finding a cicada shell should remind you that what you leave behind isn’t waste or loss, but rather, it’s a natural part of growth.

Another thing that’s “left behind” as time goes by is memories.

The cicada shell is a foretelling of a bountiful harvest ahead. Moreover, finding a cicada shell implies that, not only will the harvest be a grand one, but also that it will create great memories for you and your family.

Of course, in the past, those memories might have been more to do with the traditional, agricultural experience of harvesttime. However, nowadays, finding a cicada shell can be taken as a predictor that you’ll have a great time during the festivities of the fall and the holiday season. So, buckle up, because, if you believe in the cicada shell omen, Thanksgiving is going to be a good one this year!

Returning To The Earth

The thing about leaving things behind, is that the things we leave behind sometimes grow into something new. Of course, this is something we learn from nature. If you’re a gardener, you already know that some of the most value materials are what’s “left behind”—whether that’s cow manure or leaf litter, either way, your plants are gonna love it!

The cicada’s shell is the same as a falling leaf or a falling poop—if left alone, it will return to the earth. Elements of the shell will break down and add nutrients to the soil below. Once we understand this, we can see how the cicada’s shell can convey a spiritual meaning of new life and nourishment. Moreover, the cicada’s shell instructs us that nothing is wasted in Mother Nature’s realm.

The spiritual meaning of finding a cicada shell is that it represents the leftovers from transformation. It reminds us that even though a wonderful transformation has occurred, something will always be left behind. However, do not lament—what’s left behind can teach us, and from those leftovers, something new can grow. Also, remember, finding a cicada shell is a sign that you will soon have memories to celebrate—especially ones forged with family during the celebrations of harvesttime.

There’s something about spiders, flies, and all sorts of creepy-crawlies that makes us feel as though we’re receiving a spiritual message. As such, we’ve written extensively on all kinds of different bugs. Check out this list of some of our favorite bug articles.