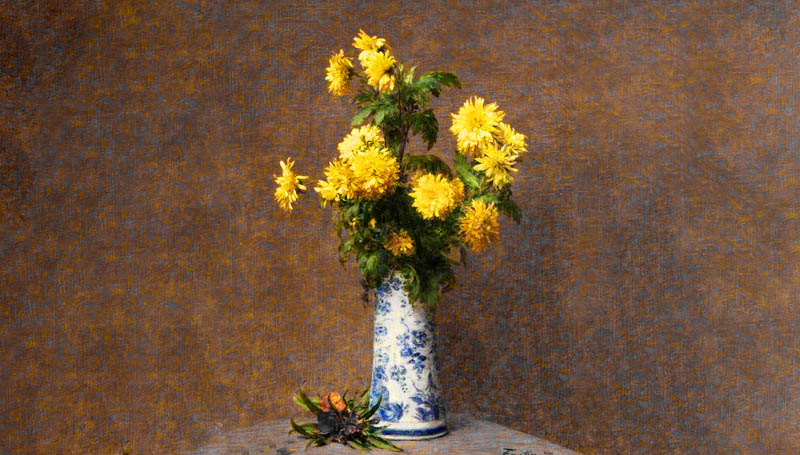 Chrysanthemums are a great topic for discussion when it comes to spiritual, traditional, and symbolic meanings. This is because the flower has been cultivated for hundreds of years. And, wherever it is grown, the people have always found great meaning in the chrysanthemum.

First grown in China in the 15th Century, chrysanthemums have since spread all over the world. The chrysanthemum is especially symbolic to, of course, the people of China, but also to their neighbors, the Japanese. While they are important symbols in East Asia, they are also very meaningful to Westerners, also.

Let’s keep going and learn about the spiritual meaning of chrysanthemums!

In the English speaking parts of the world, chrysanthemums are mostly known as a symbol of fall or autumn. Which is, of course, a no-brainer—after all, the chrysanthemum flowers in the autumn. As such, it is linked to the fall season wherever it grows—that may well be in the English-speaking world or where the chrysanthemum originates from, i.e. East Asia.

Autumn itself, as a season, is very meaningful. So, we are able to transfer and appreciate the meanings, emotions, and experiences from the autumn season to the chrysanthemum flower. As such, when a chrysanthemum greets you and you feel that it is there as a messenger, then you can reflect on the season of autumn and everything it stands for.

Check out the following list for some of the meanings of autumn:

There are many Chinese beliefs about the chrysanthemum. One stands out, though. It is said that a boy was writing. Instead of paper, he was writing on a chrysanthemum leaf. While he was writing, some dew dripped from the leaf. Naturally, the boy drank the dew. As a result, the boy lived for 800 years!

As such, it is believed that chrysanthemums award longevity. So, should you encounter a chrysanthemum and take from it a message, it could be that you are being told that you have longer than you think left!

In Japan, white chrysanthemums are used for funerals. This is because, in Japan, the color white represents death. Also, like in the West, to wear bright colors at a funeral is offensive. Therefore, the Japanese believe, it is also taboo to use brightly colored flowers at a funeral. Whereas, in the West, while we might wear black to funerals, often funeral flowers can be more colorful.

As such, to see a white chrysanthemum could be an omen of death. However, that isn’t necessarily the case. This is because the color white is used for funerals not because it is inherently linked to death. Rather, the color white is peaceful, pure, calm, and soothing. So, it makes an effective choice to soothe those grieving for their loss. White flowers remind us that our lost loved ones are now at peace in the next world, their souls are pure and calm.

So, perhaps the message from your chrysanthemum is to indulge in the sweeter things in life—dietary restrictions considered, of course.

The concept of “Four Gentlemen” is an interesting element of Chinese culture. The four gentlemen are orchids, bamboo, chrysanthemums, and plum blossoms. Each of these four plants represents something different.

So, looking at the list of meanings above, we can take the chrysanthemum as a representative of autumn and humbleness. The connection with autumn we’ve already discussed, but humility is a new one.

To be humble is a virtue. So, the chrysanthemum suggests that we could be behaving in entitled, pretentious, arrogant or even conceited ways. Perhaps you should examine your own behavior and ask if you are displaying any of the aforementioned traits. It’s a difficult balancing act. Because, on the other hand, it’s important to be confident, self-assured, and loving and accepting of yourself.

The chrysanthemum has been cultivated in the East longer than it has in the West. However, that doesn’t mean Westerners don’t have their own beliefs associated with the chrysanthemum. For example, in Germany, a tale is told of a snowy Christmas Eve. Suddenly, a wailing cry can be heard outside in the dark, cold night. The family inside open the door to see what is out there. What do they find? A bedraggled man, surely homeless. Unafraid, the family bring the cold man inside and insist that he must shelter with them and share their food.

Without warning, the homeless man tosses his outer clothes aside. Underneath, he is wearing pure, white, clean clothes. He has a halo around his head. Who is the man? Why Christ himself, the man claims. After which, he disappeared into the night. The next morning, where the homeless man had stood, grew two miraculous chrysanthemums thriving in spite of the snow.

Ever since, Germans bring white chrysanthemums into their homes on Christmas Eve as a way of symbolizing the sheltering of the baby Jesus.

Throughout the world, flowers are some of the most spiritually and culturally significant emblems. As such, we’ve written extensively about the different spiritual meanings of various flowers. Check out the list below for a few of our best.