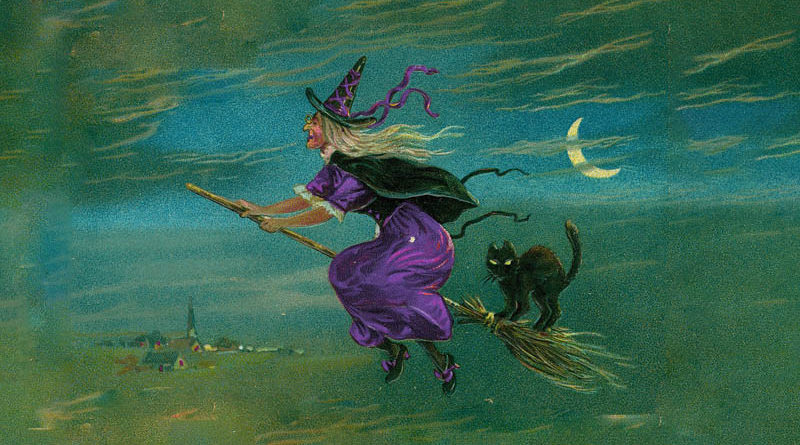 It’s only natural you’re wondering about the spiritual meaning of brooms. After all, brooms are very symbolic objects. For example, witches ride brooms—what’s that all about? We’ll look at that. Also, have you heard of the wedding tradition of jumping the broom? That’s also going to be covered. And we can’t forget cinnamon booms—they’re super popular right now and you might be wondering what meaning they convey or how they protect your home?

Well, keep reading, because we’re going to sweep away confusion over the spiritual and symbolic meaning of the humble broom.

Brooms as decorations are quite popular these days. Especially the cinnamon broom. It’s important that, when you buy your cinnamon broom, you know exactly how to position it in your home to receive its spiritual benefits. Specifically, it’s important not to face your broom downwards. In fact, you should avoid placing it facing left or right. Instead, face your broom upwards.

The reason for an upward orientation is simple: you want to filter out the bad energy. When the bristles face upwards, they are able to catch the bad vibes as they float through the air. So, naturally, it’s considered protective—an upward facing broom will guard you from any ill wishes directed your way. But, that isn’t all. An upward facing broom is considered, more generally, to be very good luck.

Where Should I Put My Broom

So, now that you know to face your broom upwards, the next question is where should it be placed? Well, the best place for a broom is above (or at least near) the doors in your home. That is, the doors that lead outside, internal doors don’t really need a broom.

The logic behind this placement is twofold. First of all, you want to catch the negative where it enters the home, i.e. the doors. Secondly, you want the broom near the door in case you decide to get it down and use it to sweep off any negative energy or ill intent from your guests.

You Can Use a Broom to Keep Somebody Away

And speaking of guests, brooms can be used to keep people away. There are three methods to achieve this.

Unwanted Guest Stayed the Night? Sweep Them Away

Stop an Unwanted Guest Before They Even Arrive!

Your second option to keep unwanted guests away is probably a bit more useful. This is because you can use brooms to stop somebody coming to your house in the first place. So, if you are expected an unwelcome visitor, you can ward them off by standing a broom up behind the door—i.e. on the inside of the door, as though to keep the door from being opened. When you position the broom, think of the person you want to keep away in order to apply the spell to the correct recipient.

Now, this one might be considered a bit rude. Especially if the person has any knowledge of this tradition. Anyway, if you’re not worried about offending somebody too obviously, then you have a surefire way to send somebody packing. It is believed that if you get your broom out and sweep around and especially in front of somebody, then they will immediately be compelled to leave.

Let’s say you’re playing a game of chance, you can use your broom to dust off your bad luck and invite good luck. So, let’s say you’re looking to get yourself a lottery win, just before you hop on the app to buy your tickets, give yourself a quick brush down. If you have a cinnamon broom, use that one. The cinnamon on it will really give you an energetic boost. Keep in mind, though, that this won’t work for games of skill like Settlers of Catan (I kid, I kid).

So, imagine the scene, you’ve gone ahead and placed your cinnamon broom above your door like you’re supposed to. Not only that, you’ve placed it facing upwards for an extra dose of good luck. Then, suddenly, the broom falls from its perch and its the ground. Your first thought might be, heck, is that a bad omen? No, absolutely not. But, on the other hand, it’s not necessarily a good omen either.

So, what does it mean when your cinnamon broom falls? It means that you will be receiving a guest the next day. That’s why it can’t be said that it is either an exclusively good omen or an exclusively bad omen. You’ll find out if the omen was good or bad when the prophesized visitor arrives.

But, don’t forget, if you want to ward off said visitor, you can take the fallen broom and place it against the back of your front door. This is believed to keep away unwanted arrivals.

How to Make Your Own Cinnamon Broom

It’s common to see cinnamon brooms for sale in the fall. And, lots of people might make you feel bad for buying one instead of making your own. But, really, it’s all down to personal preference. If you would like to make your own cinnamon broom, it’s actually simpler than you might imagine.

Grab something to make the bristles out of. You can use anything from twigs to cornstalks. But, the best and easiest thing to work with is probably going to be pine straw. It depends on where you live, but pine straw is a pretty plentiful resource in lots of places.

Next, grab some twine and use it to bind the pine straw at one end creating a “broom” from the straw.

Now it’s time to make the cinnamon mix. Take a tablespoon of vegetable oil and blend in some drops of cinnamon essential oil. How many drops? Well, it’s not an exact science but 20 drops should be enough for a tablespoon. You can do a few more if you want it to be extra cinnamony.

Then, simply brush the mixture onto the pine straw and you’re all set—it’s ready to be hung over your door.

What Does Cinnamon Represent?

Cinnamon is believed to possess a number of magical properties. Generally speaking though, the spice is thought to have energetic properties. It is believed to inspire action, movement, and motion. As such, a cinnamon broom is considered an active protector of the home.

Cinnamon is also used to speed things up. So, a cinnamon broom doesn’t just catch bad energy, it catches it quick like. So, no matter how fast working or potent any ill wishes towards you may be, placing a cinnamon broom above your door is more than enough to capture and dispel those negative intentions.

Don’t Sweep at Night! Ever!

So, long story short, if you spill some coffee grounds after sunset, wait until sunrise to sweep them up. Otherwise you’ll have some seriously bad luck!

Are There Other Times I Shouldn’t Sweep?

Yes, there is one time that’s even worse than sweeping at night. That time is on New Year’s Day. This is because the bad luck we mentioned above—i.e. conflict, financial woes, sorrow, etc—will be visited upon you for the entire year if you make the mistake of sweeping on New Year’s Day. So, when you’re hung over and thinking about sweeping up after your New Year’s Eve festivities, just go back to bed instead. Sleep off that headache and tidy up on January 2nd instead.

It is said that a broom can be used to enforce romantic loyalty. Some believe that to compel somebody to remain romantically loyal to you, simply sweep around them in a circle and they will be bound to you and unable to leave.

However, be careful, love spells are a problematic area to wander into. Would you really be satisfied if a person was only with you because you cast a spell on them. Also, imagine this: maybe they would have loved you and stayed loyal to you without the spell anyway. But, because you tried to deny them their freewill then you’ll never know.

There’s an important tradition concerning brooms and moving house. It is generally believed that it is bad luck to bring an old broom with you to a new house. This belief is also held by adherents of Feng Shui. This is because the old broom is believed to be carrying all the dirt, i.e. the negativity, of the old home. So, naturally, to bring your old broom to your new home would be to deny yourself the chance of a clean start at the new place. Leave your old broom behind, along with your bad habits and any bad memories you have of your old home.

Why Do Witches Ride Brooms?

Way back in the 1400s, there was a monk by the name of Guillaume Edelin. He was an interesting character, because he claimed he had made a deal with the devil. As a result of his agreement, he was given the ability to fly. But, he didn’t just fly unaided, instead he actually used a broom to fly. So, Brother Edelin of Saint-Germain-en-Laye, France was the first ever witch to fly on a broom. So, ever since, we have associated witches with flying on brooms. And, we have Guillaume Edelin to thank for that.

Bread was popular in the Middle Ages, the same way it is now. But, back then, bread was more often made of rye than wheat. Unfortunately, there was a fungus that commonly infected rye. In excessive amounts, the fungus could kill. But, in smaller doses, it caused hallucinations! As such, the bread makers of the Middle Ages (i.e. women) came to use the fungus as an indulgent and exciting experience.

However, eating the fungus was very unpleasant indeed. In fact, it caused vomiting and skin irritation. So, other ways of benefiting from the fungus’s effects were explored. It was discovered that hallucinations could be experienced if the fungus was smeared on the skin. But, not all skin is created equal.

Some parts of the body absorbed the fungus better than others. Women discovered that if they applied the fungus between their legs—you know where—that they experienced more intense hallucinations.

So this is where witches and broomsticks come into the story. Women used the stick of the broom as an applicator for their fungus. They would smear it on the stick and then “ride” the stick to apply it. As you can imagine, back in those days women engaging in hallucinogenics were, of course, seen as “witches”.