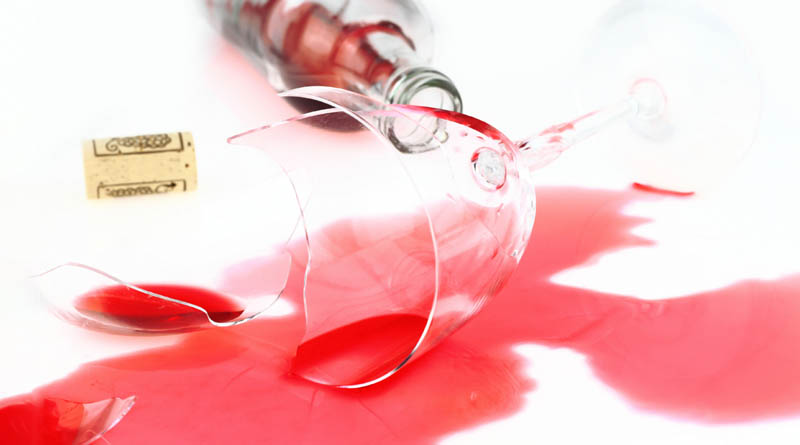 So, you’ve broken a wine glass ( sometimes spelled “wineglass”) and, naturally, you’re wondering if there’s an omen or spiritual meaning associated with it? Well, you’ve come to the write place!

It’s pretty common to break drinking vessels—whether it’s a coffee mug or a dainty little teacup, whenever you mix liquid and ceramic or glass materials it’s a recipe for disaster. However, there’s one type of glass that’s at serious risk of being broken—the humble wine glass. Think about it, they have that thin little neck, combined with a top-heavy globe portion. So, that’s already pretty dangerous. Then, add the fact that you might be a bit tipsy into the mix and disaster is afoot!

What Does Wine Represent?

Wine is a highly symbolic substance. It represents so, so much. Going back to ancient Rome, wine was, of course, associated with joviality, excess, luxury, and celebrations. A lot of that association has continued to modern times—we still celebrate with a glass of wine.

Although, in the modern world, wine has some newer symbolic meanings. For example, wine is associated with sophistication. Which, you might think, isn’t something new—after all, for a long time, quality wine was only available to the upper classes. However, there is a subtle difference between sophistication and opulence. That is, you can be rich, without necessarily being sophisticated. And, conversely, you can be poor, and be very sophisticated.

And What Does Glass Stand For?

Also, because of the brittle nature of glass, it represents fragility. Wine glasses are, of course, very fragile because they’re made of thin glass. As such, this is an important spiritual meaning to consider. Literal fragility is worthy of reflection—i.e. where are you most physically weak? However, symbolic or prophetic fragility might be a more meaningful thing to consider. For example, do you have tense relations with people? Are you on the verge of losing your job? Do you suspect your car is about to encounter a serious mechanical problem?

All things to be considered.

In movies and TV shows, spilled drinks are often used a visual cue concerning violence, murder, or other forms of death. This is especially true when it comes to spilled wine. You might be wondering what movies and TV shows have to do with spiritual meaning. Well, remember, art is of the culture and contributes to the culture. As such, you will find, when watching movies, that they are filled with symbolism—often, that symbolism is based on traditional beliefs.

Also, remember what we mentioned in the introduction to this article—wine represents the blood of Christ. That blood was, of course, spilled by the Romans when Jesus was betrayed by Judas. So, wine is a central part of that story. When shared between Jesus and the Apostles, it represented a bond and loyalty.

Therefore, a broken wine glass, especially if it was broken when it was full with wine, represents spilled blood.

Don’t panic just yet, though. Sure, this sounds like it could be a pretty bad omen. However, remember that not all spiritual meanings and omens are about literal prophecies. Instead, they’re often simple messages and reminders to reflect on important issues that might

When it’s time to celebrate, sure, you might drop the coin on some Champagne. However, for a lot of us, it’s just time to get the wine glasses out and to open whatever cheap bottle we have lying around. In this economy, a lot of us will drink whatever we can get our hands on!

So, what does it mean if you drop and break your wine glass when you’re in the middle of celebrating? Well, simply put, it is quite a concerning omen—the broken wine glass can be a message that the celebration will be cut short. However, all’s not lost. It could simply be that, yes, the celebrations will be cut short, but it doesn’t mean there won’t be different things to celebrate in the future.

If you’re concerned, though, there are things you can do to react to this spiritual message. For example, instead of seeing it as a “bad omen” that portends doom, instead, take it as a warning that it is time to box off the celebrations for your latest success. You don’t want to rest on your laurels. We should always move forward, start making plans, and begin to execute them in order to work towards our next success!

Wine is used as a social lubricant. As such, it aids in the building of bonds—both platonic and romantic. Therefore, when we break a wine glass, it’s natural that we could make a symbolic connection between a broken wine glass and a broken bond. So, some people believe that, when you break wine glass in somebody’s company, then your bond with that person could be at risk.

This message synergizes well with the idea that a broken wine glass—and therefore, spilled wine—is symbolic of disloyalty, and consequent conflict. However, like always with so-called “bad omens” there’s always a positive way to look at it. If you break a wine glass and begin to fear for the strength of a particular bond, then take the message as a warning to take action! Conversely, it could be that the incident is an opportunity for insight regarding the value of certain relationships in life—i.e. maybe some bonds and the value they bring to your life should be reconsidered.

Breaking a wine glass in a dream is quite the symbolic occurrence. All of the prior sections in this article apply to a dream meaning the same way they would a waking meaning. However, when we dream, many believe that we are picking up on messages from other souls. As such, it could be that there are people (here and passed) that are concerned for you, and are convey their message to you in the form of a broken wine glass in a dream.