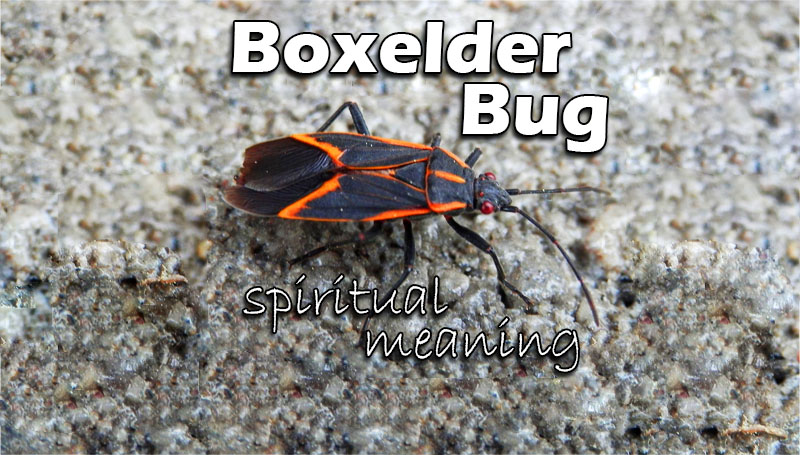 Boxelder bugs, are you seeing them? Well, at the time of writing, it’s springtime and so they’re starting to show themselves. Understandably, you might be wondering if the boxelder’s appearance in your life carries any significance. What are the omens, symbols, signs, and messages associated with the sighting of boxelder bugs?

First and Foremost: What Are Boxelder Bugs?

Boxelder bugs are, surprise, bugs. But, it might be news to you that they are “true” bugs. While we call lots of insects “bugs”, not all of them really are. Boxelder bugs belong to the Hemiptera order of insects, which is what makes them true bugs. The adult boxelder bugs are black (or very dark brown) with orange stripes on their wings. They’re native to North America, but have become invasive in South America. They get their name from their favorite food, because they specialize in eating boxelder seeds. Although, they’re not too picky because they’re also eat the seeds of maple and ash trees.

Boxelder bugs have a strong association with springtime. This is because they remain dormant during the winter. Typically, they will overwinter in the warmth of leaflitter or other botanical litter. However, modern households also provide them with tempting shelter when the frosts arrive.

So, what does this mean? Well, creatures that emerge in the spring are, naturally, symbols of new life, rebirth, and eternal life. Personal reflection will be required to determine what this means for you. Question yourself: have you been struggling with a difficult time (symbolized by winter) and, perhaps, it is time for you to emerge from those dark days and to embrace the bounty of spring.

Color and its Meaning in Boxelder Bugs

Boxelder bugs appear black, with orange stripes along each flank.

Firstly, let’s consider the color black. This is a boxelder bug’s dominant color, so it makes sense to consider it before anything else.

Black, in the West at least, is associated with evil, power, authority, and death. We wear black at funerals to indicate we are in mourning. In the example of funerals, though, it is also a respectful color—it would be inconsiderate to wear bright (i.e. celebratory) colors in a moment of profound sadness. To extract a personal message, ask yourself is there a part of your life where you could be more sensitive to the mournful mood of others?

However, taking the boxelder’s black color as an omen of something evil or morbid would be a mistake. This is because the boxelder bug is a springtime critter, and as such its association with life overrides any negativity you might connect with the color black. Furthermore, in the West, we also associate black with some positive things like elegance and sophistication.

Additionally, in Japan black creatures are seen as guardians. This is because they have the ability to absorb evil spirits, thereby protecting us. This belief is often displayed in Japanese koi ponds. While koi fish are known for their bright colors, few Japanese koi ponds lack at least one black koi. This is because the black koi is believed to prevent its pond-mates from falling ill; the belief being that evil spirits cause illness.

Finally, whenever black comes to you and feels significant, you should consider outstanding shadow work. Are there issues with your personal and spiritual development that need to be addressed? So, think about yourself and how you can become more contented. If you can, resolve past issues—you’ll feel better.

While black might be a boxelder’s majority color, the contrasting orange catches the eye first. So, we can’t ignore its importance.

Orange, between yellow and red, so it combines some of the meanings of each of its parent primary colors. While, also having significance of its own. But, in the context of a springtime bug, what yellow brings to orange should take priority over red.

Orange is, more than anything else, a warm color. Consider this: as the boxelder bug emerges, so does the warmth, i.e. spring, and soon summer, are returning. So, consider the importance of warmth and comfort. Also, orange is known as a symbol of joy. So, naturally, embrace joy whenever and wherever you can—it could be that the boxelder bug has presented itself to you simply to remind you to be happy! They’re pretty whimsical and cute bugs, so why not a message of happiness?

Also, orange stands for creativity. Could it be that you are in a phase of your life where creativity could be key? Where to direct your creativity will require reflection. For example, it could be that creativity is required at work to advance your career. Alternatively, your mood could be suffering from a lack of creative endeavors. In which case, consider picking up a creative hobby!

Orange in the Chakra System

Lastly, let’s consider the color orange in the chakra system. Orange is the color of the sacral chakra. As such, we can take orange to draw attention to sexuality, creativity, desire, the reproductive system and compassion. Also, there the sacral chakra is connected to taste.

Check out our complete guide to balancing your chakras here.

It’s important to know that the orange of your boxelder bug wasn’t always orange. In fact, boxelder nymphs start out red! So, let’s consider the color red. Red, like black, is associated with power. But, it is also associated with love. And hate! So, what connects love and hate? Passion is the answer. Therefore, we have to take red as a color that communicates very strong passions.

To take importance from red, though, it would require the sighting of nymph boxelder bugs rather than adults. But, it can be used together with personal reflection to, perhaps, crystalize a meaning or message.