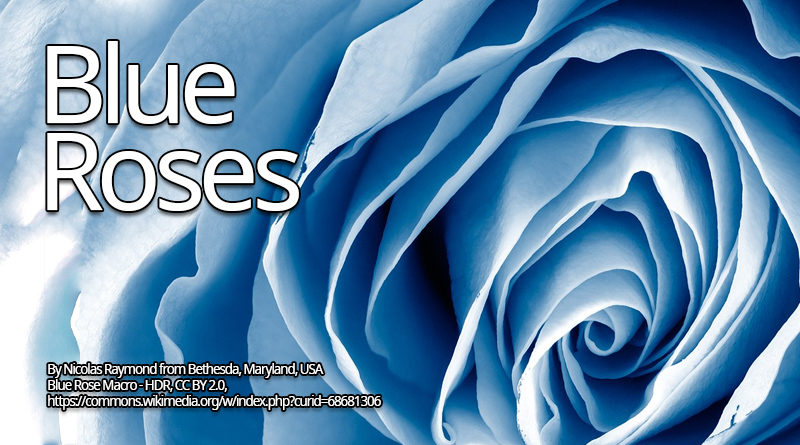 The meaning of a blue rose—why do they seem so much more meaningful than red or pink or yellow roses? Well, it might be because they’re rare. In fact—in nature—they’re impossible. If you see a blue rose, it is in actually dyed blue. So, that’s probably why they catch our attention. Simply because we’re not used to seeing them.

As mentioned above, they’re not present in nature. But, it’s important to define what we mean by nature. Because roses—as we know them, anyway—are not really natural. In actuality, ornamental roses were selectively bred by gardeners over many generations. To do this, they cultivated the wild rose and then, from there, they focused on propagating examples of the bush with particular traits, i.e. bigger flowers, double blooms, red coloration, white coloration, etc.

So, you might wonder, why haven’t we been able to create a blue rose via selective breeding? Well, because, so far, gardeners have not encountered any blue mutations in roses. After all, selective breeding can only go so far. Think of dog breeds, there are so, so, so many different breeds of dog. And while they might vary a great deal, there are some rules you just can’t break. For example, a dog will never naturally have purple fur—this is because mammals are limited to greys, browns, and blacks in their hair. It’s a genetic limitation. Blue in roses is similar, it’s just not possible (at the time of writing, anyway).

So, yes, we have created “blue” roses by dying white ones. And, technically, they’re real in that they’re real roses and the blue dye is really blue. But, no, they’re not “natural” by the word’s common definition.

Scientists, however, have been hard at work circumventing the the rose’s inherent limitations. Specifically, they have attempted to create blue roses via genetic modification. Using blue pigment from delphinium and viola plants, scientists were at least able to create a lavender rose. Close enough?

Symbols of the Impossible

So, considering the above, because a blue rose is (at least, historically speaking) impossible, of course they symbolize the impossible. So, if you are attempting to manifest the apparently or near impossible, then perhaps consider accessorizing with a symbolic blue rose. This is especially effective when focusing on the possession of objects of beauty. So, whatever your “unicorn” is, blue roses appearing in your life could mean you are closing in on realizing that practically impossible dream. In fact, many cultures believe a blue rose is a definite symbol of wish fulfillment!

Additionally, blue roses symbolize mystery. This is because, as discussed thus far, they are quite impossible to obtain. As such, the very existence of a blue rose triggers curiosity. Instantly, we begin to question everything about a blue rose that enters our field of attention. How is this blue rose even possible? And what kind of trick is being played on us? Because, after all, many of us know that blue roses are impossible in nature.

Therefore, when confronted with a blue rose, we attack that mystery with our minds. First we might ask: is it dyed? Next, we might wonder if it is a new break through with gardeners? Or, perhaps, like the lilac rose mentioned above, it’s a scientific breakthrough in genetics. After we’re finished questioning the rose’s underlying nature, the next question is: well, what does this strange flower mean? And so, mystery… mystery… mystery!