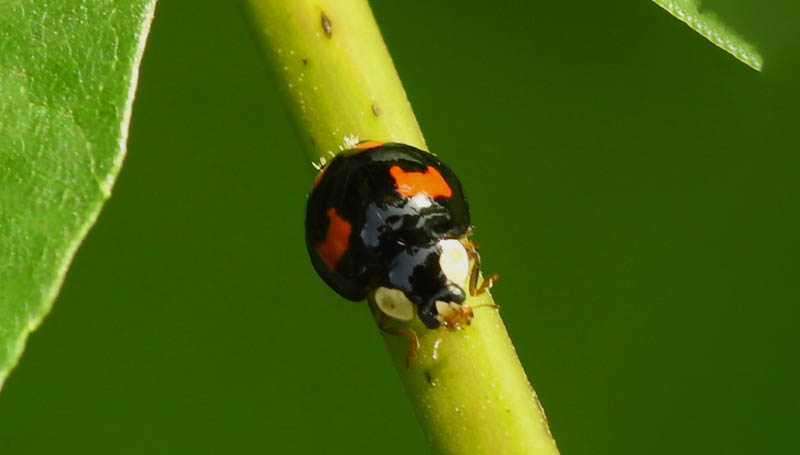 I did some research and found that there are many meanings associated with this little bug. A few of them include protection from malign forces, strength, organization, transformation, and issues with love and relationships. Additionally, the omen of seeing a black ladybug can feel quite foreboding when you learn the other common name for these unusual little critters: “twice-stabbed lady beetle”. Yikes!

Try not to worry too much, though—in this article we’ll explain the (mostly positive) spiritual meaning associated with seeing a black ladybug.

What do Ladybugs Symbolize in General?

Your typical red and black ladybugs convey many different meanings. And it’s important to first underpin your understanding of black ladybugs, by appreciating what “regular” ladybugs symbolize.

Ladybugs have been revered by many cultures throughout history for their unique beauty and purported ability to bring good luck. More than anything else, ladybugs are symbols of prosperity. In particular, their majority red coloration brings a message and omen of good fortune and joy. This is especially true in countries influenced by Chinese culture; within the Sinosphere, the color red is inseparable from good fortune and joy.

So, the answer to the question, is yes—black ladybugs are good luck, and this is especially true if it lands on you!

Transformation: ladybugs, like so many other bugs, start out with a larval phase. Significantly, the larval stage is unrecognizable from the final form of a ladybug. But, unlike other creepy insects, ladybugs become something quite pretty. While, other bugs might transform, like a ladybug does, they turn from an unpleasant looking grub into an even uglier grown-up bug! But, let’s be fair, that’s a matter of opinion!

The above message of transformation is an important one. It acts as a reminder that while we might feel like our current life is in a bit of an ugly moment, don’t fret, because things can turn around in no time. Your future might be as pretty as a dainty little ladybug!

The last thing ladybugs symbolize (black ones included) is bravery and an adventurous spirit. This is because ladybugs are daring fliers. They decide what they want—no matter how far away it is and no matter how small they are—and they fly to it and get it. So, think about what you want in life, and be brave (but safe) in pursuing it.

This spiritual property is true of both black ladybugs and red ladybugs! Actually, a black ladybug could convey a more powerful message of bravery simply because of the extra “oomph” that the color black offers. Black has a wide range of symbolic meanings, both positive and negative. In some cultures, black is seen as the color of death and mourning, while in others it is associated with strength, power, and authority. Therefore, a black ladybug could be seen to set about its adventures with strength and power.

Black is an interesting color when it comes to symbolism and spiritual meaning. Sure, in the West black has lots of meaning. For example, it is used as a color of solemnness and mourning at funerals. Black is also used by people in positions of power to convey unshakable authority—think of the president’s secret service in all black suits.

Japan, on the other hand, has a fascinating relationship with the color black. Consider Japanese koi ponds. In Japan koi keepers generally keep colorful koi fish. Everybody knows that, right? Well, it’s true. But with one exception. A solid black koi fish is often kept with the colorful koi. The purpose of the black koi is to absorb the malign spirits that might make the other fish sick. In short, black koi act as guardians.

So, it’s fair to expand this appreciation of the color black to our little black ladybug friends. They may be appearing to you as a form of guardian, protecting you from any negative experiences. Their role as guardians can be seen as even more significant if the bug interacts with you in any way. For example, if the black ladybug lands on you or flutters around you, some spiritually minded people would suggest it is letting you know you are under its protection.

Twice Stabbed? Should I be Worried?

The last thing to think about when it comes to the black ladybug is its ominous common name – the “twice-stabbed” ladybug. It’s tough to dodge the meaning of this. The name is a reference to the appearance of the little critter. After all, it looks like somebody stabbed a beetle and left two red, bleeding wounds in it.

So, does this mean the bug is an omen that you’ll be stabbed? Eh, probably not. But, it can be a point for reflection. Consider your life and your current context—it’s never the wrong time to evaluate your relationships. Ask the question: are any of your current relationships toxic, dangerous, or damaging? Is anybody hurting (i.e. metaphorically stabbing) you at the moment?

Think about working on or, if needs be, ending those relationships.

What Does it Mean to Dream of a Black Ladybug?

Some might interpret dreaming of a black ladybug as a sign of bad luck. Others concur, believing that the dreamer is about to experience a period of hardship or difficult times.

However, I would argue that to dream of a black ladybug is to receive a symbol of strength and resilience. No matter what interpretation you subscribe to, one thing is certain: the black ladybug is a less common, and therefore symbolically significant creature. In many cultures, the Ladybug is seen as a lucky omen, and it is said that if you dream of one, your wishes will come true—this is the same for a black ladybug or a red ladybug.

So if you find yourself dreaming of a black ladybug, be positive and, if you ask me, take it as a sign that good things are on their way.

Further Reading – Other Types of Ladybugs

We’re big fans of ladybugs, they’re mighty pretty little bugs—don’t you think? Well, we do. And that’s why we’ve put together several different articles talking about the spiritual meanings of different colored ladybugs, not just the black type. We’ve also got some other more general articles about ladybugs. Check out the list below to see if you find anything interesting.