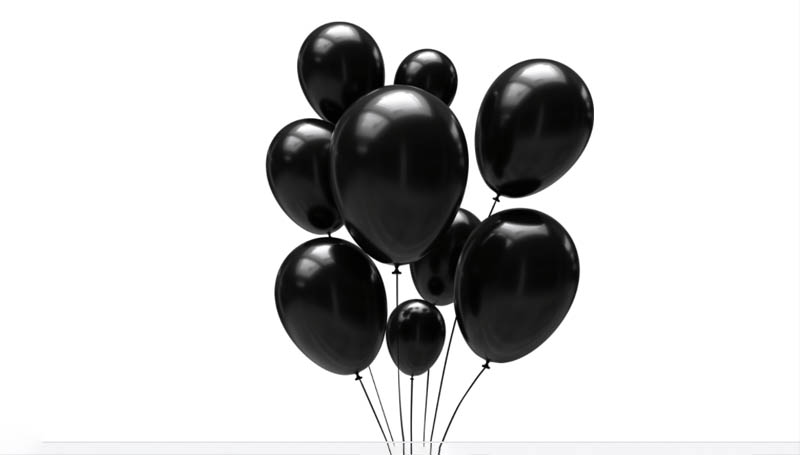 A black balloon has a very specific meaning. But, before we get into that, let’s look at what balloons stand for in general.

Balloons symbolize our desires and aspirations (and that’s true, to some degree, even about black balloons). Let a balloon go, and watch it soar into the heavens—when it’s filled with helium, anyway. We all want our goals to be like efforts and our experiences, i.e. always rising (improving). Another thing to think about with balloons is how they represent our prayers or manifestations—we set our wishes here on earth, and then we send them off to the heavens or the universe depending on your personal beliefs.

Having a party? How about some balloons?! That’s what we do, we like to use balloons at parties of all kinds. We use them at kids’ parties, of course. Especially for birthday parties. But, kids aren’t the only ones busting out the balloons for their big day. Politicians love to use them, too! Have you ever seen a candidate’s victory party? After a big win, they like to release a whole bunch of balloons and let them float down around them while they celebrate. So, that’s why we use balloons as a symbol of celebration and success.

Black Is A Powerful Color

You probably already know this, having experienced it in real life. But, black is a very symbolic color indeed. We utilize black to represent sorrow and mournfulness following the loss of a loved one. We also use black to stand for and convey unshakable power and authority. For example, think of government agents dressed in black and driving black vehicles. They choose the color black because it communicates to you that these people are powerful and not to be challenged.

Spiritual, Symbolic, And Metaphysical Meaning Of A Black Balloon

Black balloons aren’t all that common, so if you have seen one without expecting to, then you may have received an unusual omen indeed. This is because a black balloon is an omen that you will achieve your hopes via some sort of intimidating authority. So, if your dream is, for example, to become a government representative in a position of power, then a black balloon could well be the omen for you!